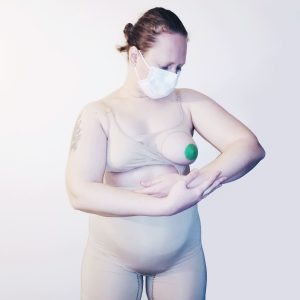 Myshko: “In 2019-2020, during the pandemic, I was pregnant with my first child. The pregnancy was treated as normal, however, I developed severe pre-eclampsia and lost my child at 31 weeks. The disease went unnoticed despite reporting all symptoms until I stopped feeling fetal movement for two days. My daughter Feetje was stillborn on April 1st.”

Yelena Myshko is a multidisciplinary artist based in Zutphen, the Netherlands. She was born in Kyiv, Ukraine in 1985. Myshko holds a BA from Utrecht School of the Arts, MA from ArtEZ University of Arts and MSSc from Linköping University. Her background is in fashion design and gender studies, in addition performance art plays an integral part in her practice since Myshko was introduced to it in 2005.

Her interest in politics led to an affiliation with the international protest group FEMEN for two years. Myshko participated in bootcamps and actions in Germany, France and the Netherlands, eventually becoming the leader of FEMEN Netherlands. This experience influenced her artistic tone of voice and visual language.

As an ambiguous agent of change, I propose an alternative perspective on topical societal issues by projecting them on my body. I perform in front of the camera to create intimate images that reach the audience through reproduction, turning to social media, newspapers, magazines, and TV to document and spread my work. In this way, I explore identity production of this day and age.

Speaking my truth no matter the consequences, clashes with the world. I try capturing this moment and grab attention to provoke associative thinking. As a result, my work is often unsettling; it pinches and makes you look twice.

I employ mundane aspects of ordinary life as a weapon to destroy conventional beauty and propose a counterfeit. Whether I abandon make-up, pick everyday objects, blunt body language or choose costume, bodypaint, and elegant movement, the challenge always is to use simple means in resourceful ways. 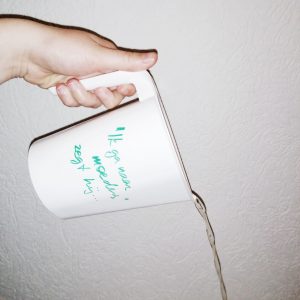 Myshko: “Mothers for Mothers, a pharmaceutical initiative. They collect urine from newly pregnant women and make medicine from it. The women receive a synthetic baby towel and pregnancy magazine. The drugs are sold commercially. The text on the jug indicates their origin story. From mothers for mothers. In my view, it is a patriarchal body that abuses the solidarity of women.”